She Got Free From Food Addiction

I remember the day I first spoke with Jackie. She was exhausted from trying to figure out her food addiction. She had so much nutrition knowledge, had tried all the diets, read self help books, and even done inner work, but she still felt blocked.

It was like something was holding her back and preventing her from mastering this and moving on. She didn’t want to go to food for comfort, satisfaction and to deal with her emotions. She wanted a healthier relationship with food.

And it felt like food was blocking all that.

By the time Jackie found me, she was fed up with trying to fix her food problem alone. “I do everything alone!” she said. And all it was getting her was more frustration and feeling like a failure.

She wanted help. (Even though there was a defiant and rebellious part of her saying, “What are you gonna make me give up? Don’t you DARE take my food!!”)

I let her know that she wasn’t alone and that she didn’t have to ditch her food in order to start working with me. I assured her that what we were going to do together wasn’t about diets or regurgitated health tips like, “think positive,” or “everything in moderation.”

We were going to get deep – to the root of what was keeping her stuck. So that she could once and for all get free from what was blocking her and have the food problem go away.

She was eager to do the work, despite her trepidation.

But I let her know that the fear was totally normal too and that most of the women I work also came to me feeling fear, but they still got free.

In fact, I shared with her, women typically come to me with fear, anxiety and a lifetime of failed diet attempts. I can work with all that. Those women still get free.

But that I can’t work with is someone who isn’t ready and willing.

Because to not get free from your food addiction and to stay where you are feels like a spiritual death sentence. Even if your life on the outside looks pretty good. Even if you’re a relatively positive person. Even if you help and inspire others.

Being ready and willing means that you cannot live one more day not fully living.

That you are done with holding back, playing small and feeling like a fraud.

And luckily that’s where Jackie was.

And so I started working with her. And in less than 6 months Jackie got totally free from food addiction. She felt ease and intuitive guidance around her food. It was no longer a source of struggle, effort and frustration.

Food just didn’t call to her anymore. She still enjoyed food. It was just that food was no longer the main event in her life.

But it didn’t stop there. She also went from being totally fixated on external motivation to being internally and intuitively directed. She was more confident and clear, and this allowed her to start living by trust and intuition vs rules and rigidity. And so she relaxed and life became easier and more in flow.

And, since she no longer felt like a fraud, she naturally and effortlessly started helping more people which gave her an increased sense of fulfillment, meaning and connection.

Jackie came to me to get free from food addiction, and left a more confident and self-loving woman. And today, she serves as an inspiration to other women to show them that it IS possible to get free AND you don’t have to do it alone.

And Jackie’s experience isn’t an isolated incident. She followed a tried and true formula that has helped thousands of other women get free as well.

I share Jackie’s experience because I want you to know that it is totally possible for you to get free. Because that old story of “I’ll always have to deal with this” is kinda bullshit. Because you don’t always have to be “recovering” and “trying” to control your food.

And not in some fake infomercial kind of way.

But in a real, crying-from-gratitude kind of a way. Where you’re sitting there in your house or wherever, and you all of a sudden realize that that thing you used to always do…you’re not doing it anymore.

And tears well up. And you don’t know the exact moment the miracle happened. But now you are operating on an entirely new plane.

And you feel like a different person. And you find yourself doing things that you never would have imagined before. And you are living more life. And you are helping more people. And you you realize, this is freedom.

And it was all because you finally got honest. And you said yes to taking one tiny step at a time. And you reached your hand out so that you could be held and supported along the way.

And yes, this could be your story too.  I say that because I have seen women all over the world get free. Even the ones who thought it would never happen for them.

So if there is a voice deep inside that’s saying, “I can’t keep doing this. I want freedom.” Then I want to help you. And even if there is another scared voice saying, “but what it you’ll fail?” I invite you to take one tiny step in the direction of what you really, really want deep down.

Because each time you look fear in the eye and take action anyway, you move one step closer to freedom.

So if that’s what you want then I will hold that vision for you. Because you free from food addiction is a win for the world. And I want to live in the world where more women are free, confident and helping more people.

In dedication of all things raw, real and recovered,

P.s. If you want to hear more about what Jackie did to get free from food addiction and how you can too, then send me a message or hop onto my calendar and let’s chat. You can tell me where you’re at right now, what you want and then we can take a look at what might be blocking you. And whether we decide to work together or not, I’ll give you some resources that can help you right away.

So if that’s something you’d like to do, then schedule a call with me by clicking this link: http://freefromfoodaddiction.youcanbook.me (This one hour one on one session with me is my gift to you as a thank you for being a part of my community.) Thank you for being on this journey alongside me. xo

She Got Free From Food Addiction I remember the day I first spoke with Jackie. She was exhausted from trying to figure out her food addiction. She had so much nutrition knowledge, had tried all the diets, read self help books, and even done inner work, but she still felt blocked. It was like something was holding her back and preventing her from mastering this and moving on. She didn’t want to go to food for comfort, satisfaction and to deal with her emotions. She wanted a healthier relationship with food. And she was done with food eating away her time. She had things she wanted to do, people she wanted to help, a life she wanted to live. And it felt like food was blocking all that. END_OF_DOCUMENT_TOKEN_TO_BE_REPLACED 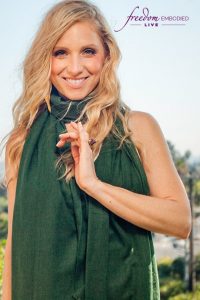 Fear or Truth? How To Read Your Gut Instinct

How To Stop Binge Eating And Food Obsession

How To Move Past Resistance

How To Stop Being Too Busy

How To Have The Confidence To Put Yourself Out There

Read what others are saying

Sign up for my e-newsletter and receive weekly tools, tips and resources straight to your inbox.